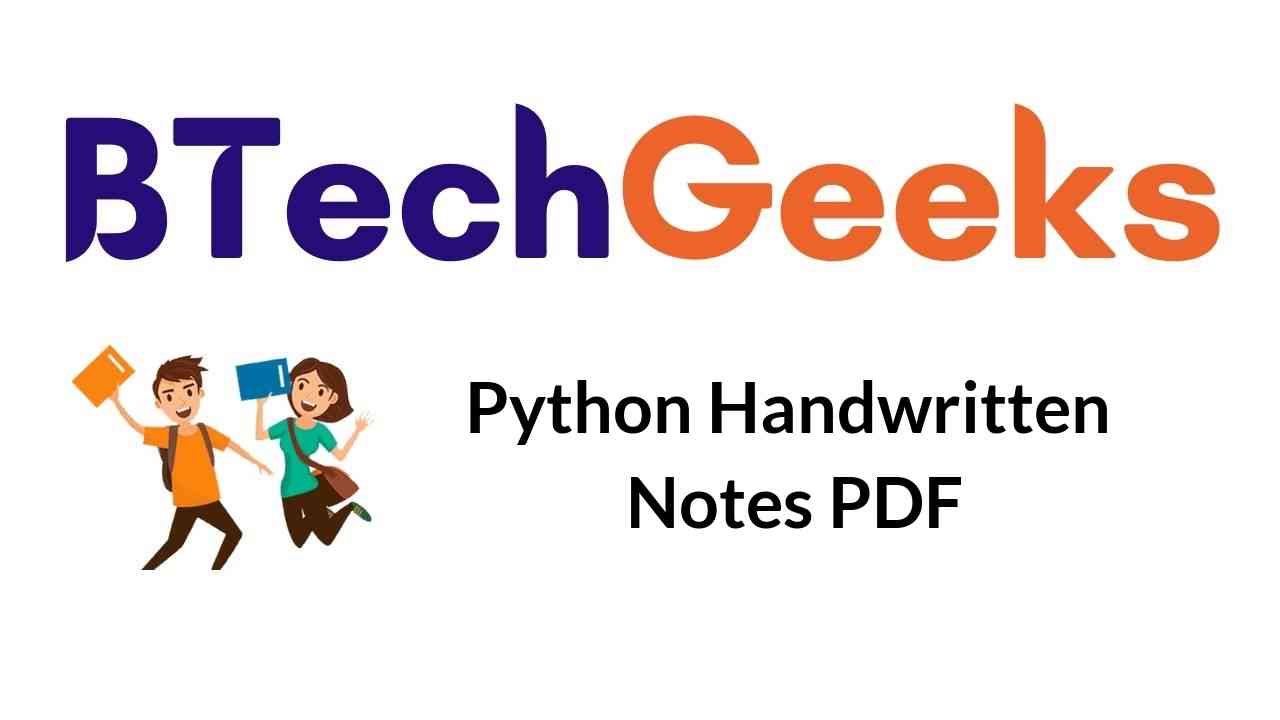 Python Handwritten Notes: Python is a popular programming language with dynamic semantics. It is well used for rapid application development because of its high-level data structures. It is also used as a glue language to connect various components. Python Programing has a simple and easy syntax that offers cost-effective programming maintenance. Programmers prefer the python language because it provides increased productivity. It is easier to debug in Python than most programming languages. If you want to learn a programming language, Python is one of the best options to start with. Experienced programmers can learn Python very fast as the language is simple and easy. In this article, BTech Geeks provides complete details about the study materials and Lecture Notes of the python language.

Python is a high-level, easily understandable, and simple programming language. It was created by G. V. Rossum and released in 1991. Python focuses on easy readability of the codes. It supports different kinds of paradigms, like structured, functional, and object-oriented programming. Python has a comprehensive standard library. Python is a popular language because of its easy-to-learn approach. Python’s code syntaxes use English keywords that make it easily understandable. Many employers from all over the world look for python developers which makes it popular among learners. Python handwritten notes pdf is available for employers and beginners in python.

Python is a popular language used in back end development. Many popular organizations like Google, Netflix, Spotify, and Instagram use Python. This language is so widely popular because it is an interpreted language. Python is used universally in a wide range of applications. Programmers prefer this language because it provides them with the option to explore more instead of focusing on solving complexities. We have made a list of books that will help you to learn Python.

There are various types of courses available for the Python programming language. So, the syllabus of Python varies depending on the type of course. It is suggested that you should know the syllabus before starting the course. It will be easier for you to understand this language well after knowing the syllabus. We have discussed the basics of the syllabus for Python below. You should check out the syllabus of your institution for the python course.

Some common questions related to Python are discussed below:

Question 1. Why is Python so popular?

Answer:
Python has a simple and easy syntax that offers cost-effective programming maintenance. Python is popular among programmers because this language provides increased productivity.

Question 2. Is C++ better than Python?

Question 3. Is Python good for the future?

Answer:
Within a few years, Python has become one of the popular programming languages worldwide. The demand for python language will be there in future as well.

Question 4. How long does it take to learn the python language?

Python is an interesting and productive language used by many big tech firms. It is also easy to learn this programming language because of its simple syntax. Hopefully, the above information about this language will help you to understand this language better.