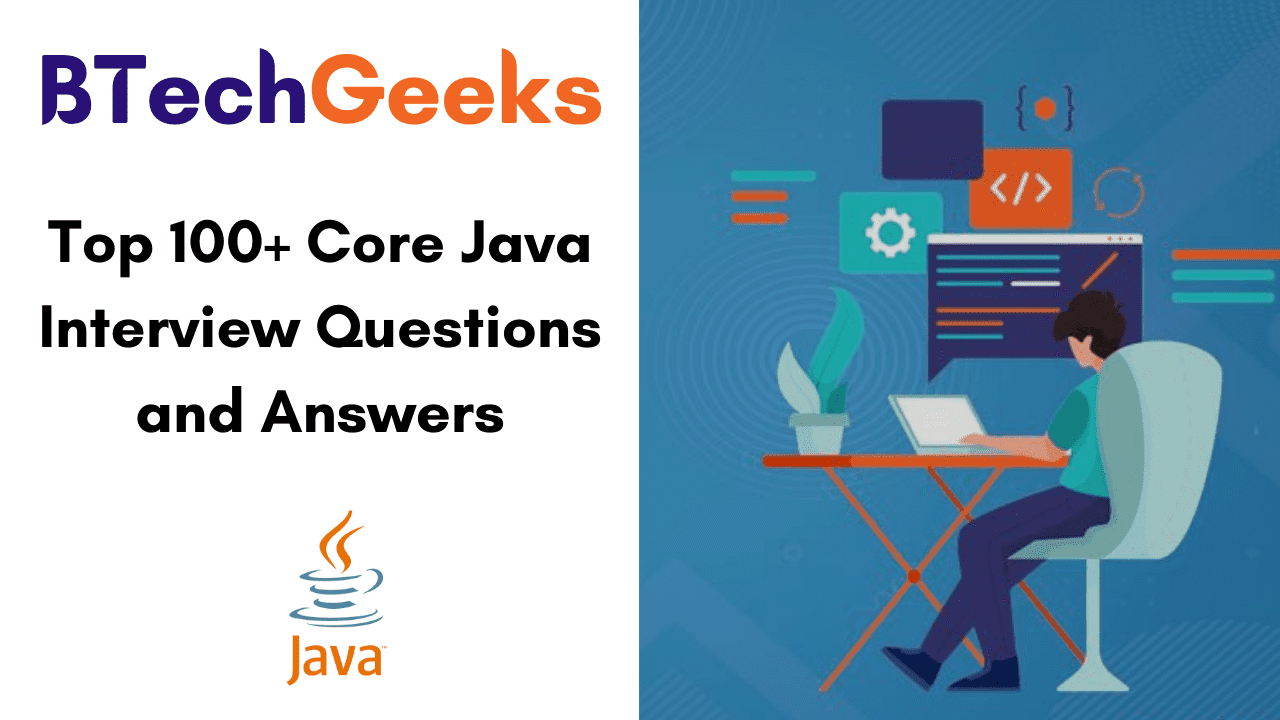 100 java interview questions: In this tutorial, we have discussed the Top 100+ Core Java Interview Questions and Answers for fresher. This article helps you to understand the basic concept of Java programming for interview purposes. All the Java concepts are explained here with an example for better understanding. This article covers Java topics like Java basic concept, Java OOPs concept, Java Multithreading, Java Collection, Java Serialization, Java Exception Handling, etc.

Question 1.
What is Java?
Answer
Java is an Object-Oriented, platform-independent, robust, and high-level programming language. It was developed by James Gosling, Patrick Naughton, Chris Warth, Ed Frank, and Mike Sheridan at Sun Microsystem in 1991. We can make the Desktop application, Web application, Enterprise application, Mobile application, and Games with the help of Java.

Question 2.
What are the various features in Java?
Answer

Question 3.
What is JVM?
Answer
JVM stands for Java Virtual Machine. JVM enables the computer to run the program. It provides the runtime environment in which Java bytecodes can be executed. JVM is platform-dependent i.e. for each software and hardware we have different JVM configurations. JVM doesn’t exist physically. It is abstract in nature.

Question 5.
What is the difference between JDK, JRE, and JVM?
Answer
JVM: JVM stands for Java Virtual Machine. JVM enables the computer to run the program. It provides the runtime environment in which Java bytecodes can be executed. JVM is platform-dependent i.e. for each software and hardware we have different JVM configurations. JVM doesn’t exist physically. It is abstract in nature.

JRE: JRE stands for Java Runtime Environment. It contains a JVM + set of Libraries. JRE contains the set of Libraries that JVM uses at runtime. JRE is the minimum requirement to run any Java code. JRE physically exists and platform dependent.

Question 6.
Explain why Java’s main method is public static void main(String args[])?
Answer
public: the public is an access specifier that can be used to specify who can access this method. JVM calls the main method from outside the class, therefore, it is necessary to make Java’s main method public.

void: void is a return type of a method that indicates void defines the method which will not return any value.

main: main is the name of the method. This is the name that is configured inside the JVM. It is the method where the main execution starts.

String args[]: String in Java is a class that is used to store Strings, and args is a reference variable that refers to an array of String types. If you want to pass the argument through a command line then it is a must-make main method String args[].

3. Static Variable: The variable which is declared as static is known as a static variable. We can have only one copy of the static variable and shared it among all the instances.

Question 14.
What are packages in Java?
Answer
Packages are nothing more than the way we organize files into different directories according to their functionality, usability as well as the category they should belong to.
for example files in the java.io package do something related to I/O, but files in java.net give us the way to deal with the network

Question 15.
What are the advantages of a package in Java?
Answer

Question 16.
What is the Object-Oriented Paradigm?
Answer
It is a programming style that is associated with the concept of object and class and another concept like Inheritance, Polymorphism, Abstraction, Encapsulation, etc. The main advantage of the Object-Oriented paradigm is code reusability.

Question 17.
What is a Java Class?
Answer
The class is the core of Java. It is the logical entity upon which the entire Java language is built because it defines the shape and nature of an object. As such the class is an important part of object-oriented programming in Java. The most important thing to understand about a class is that it is used to defines a new data type. Once we defined, this new data type can be used to create objects of that type.

Question 18.
What is an Object?
Answer
The Object is an entity that has a state and behavior. The object is an instance of a class and an object is a real-world entity. To access the members who are defined in the class you need to create an object.
for example, a chair, pen, table, bike, book, etc are the example of Object.

Question 23.
Why Java doesn’t support Multiple Inheritance?
Answer
Java doesn’t support multiple inheritances due to the ambiguity problem.
Consider a scenario where X, Y, and Z are the three classes. The Z class inherits both the class i.e. class X and class Y. If class X and class Y have the same method and we call it from child class object ( class Z object), there will be ambiguity to call the method of class X or a class Y. Therefore compiler show compiles time error if we inherit 2 classes.

Question 27.
What is the difference between Method Overloading and Method Overriding in Java?
Answer

Question 28.
What is Encapsulation in Java?
Answer
Encapsulation is an act of combining properties and methods of the same entity. In other words, it is a process of wrapping the data (variables) and code together in a single unit. A capsule is an example of encapsulation which is mixed of several medicines.

Question 29.
What are the advantages of Encapsulation in Java?
Answer

Question 31.
What is an abstraction in Java?
Answer
Abstraction in Java is an essential element of Object-Oriented Programming and it is the process of hiding the implementation details and showing only functionality to the user.

Question 43.
Why we use interface in Java?
Answer: 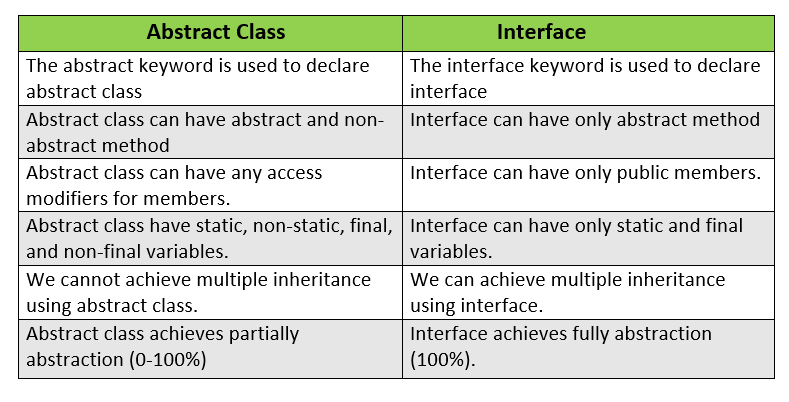 Question 45.
What is the wrapper class?
Answer:
Wrapper class provides a mechanism to convert primitive data types into an object and vice-versa.

Question 46.
What is autoboxing?
Answer:
Autoboxing in Java is a mechanism to convert primitive data types into an object of their corresponding wrapper class.

Question 47.
What is unboxing?
Answer:
Unboxing in Java is the reverse process of autoboxing. The unboxing is a mechanism to convert an object of a wrapper class to its corresponding primitive data type. 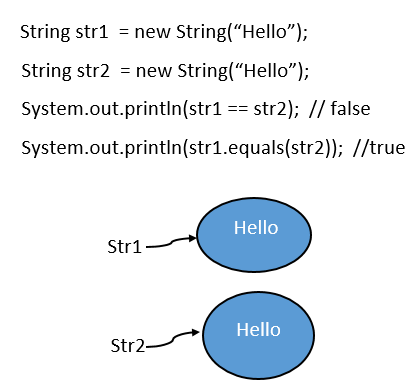 In the above example, both the reference variable(str1 & str2) contain the same String but their references are not the same, therefore “== operator” returns false and equals() method return true.

Question 54.
What is Exception Handling in Java?
Answer:
Exception Handling in Java is a mechanism that allows you to handle runtime errors so that the normal flow of the program can be maintained. Suppose If an exception occurs in your code (suppose in line 6), then the rest of the code is not executed. Therefore Java compiler creates an exception object and this exception object directly jumps to the default catch mechanism. Where there is a default message which is print on the screen and our program gets terminated.

Question 56.
Why an exception occurs?
Answer:
Exceptions in Java can occur due to the following reasons: 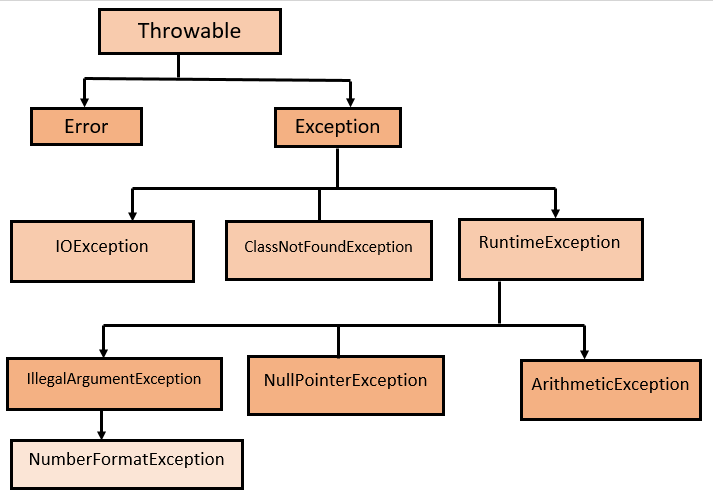 Question 59.
Explain all the keywords used in Exception Handling?
Answer:
There are five keywords are used to handle the exception in Java. Which are given below:

Question 65.
Why we use Multithreading in Java?
Answer:
The Multithreaded program enables you to write a very efficient program that makes maximum use of CPU because the idle time can be kept to a minimum. In a single-threaded environment, your program has to wait for each of these tasks to finish before it can proceed to the next one even though the CPU is sitting idle most of the time. Multithreading lets you gain access to this idle time and put it to good use.

Question 66.
Explain all the states in the lifecycle of a thread?
Answer:
All the states of the thread life cycle are explained below: 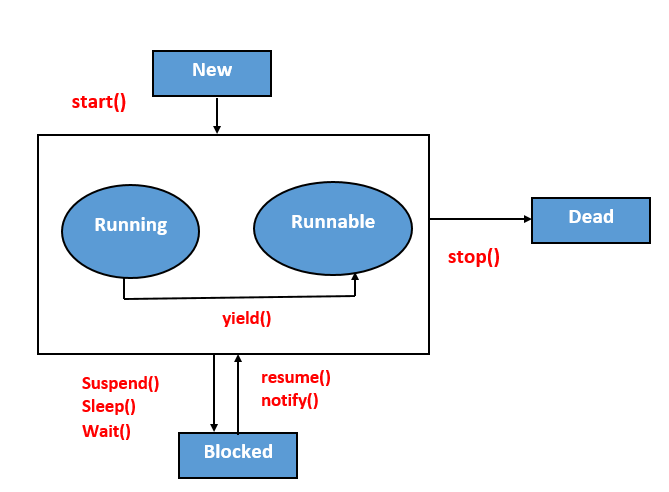 Question 70.
Difference between the wait() and sleep() methods?
Answer:
wait(): The wait() method defined in the object class and tells the calling thread to give up the monitor and go to sleep until some other thread enters the same monitor and calls notify() or notifyAll() method.

Question 75.
What is Synchronization?
Answer:
When we start two or more threads within a program, there may be a situation when multiple threads try to access the same resource. Then we need some way to ensure that the resource will be used by only one thread at a time. The process by which this is achieved is known as synchronization.

To overcome the problems of arrays we should go for Collection Framework in Java.

Classes: All the classes used in the Collection framework are given below: 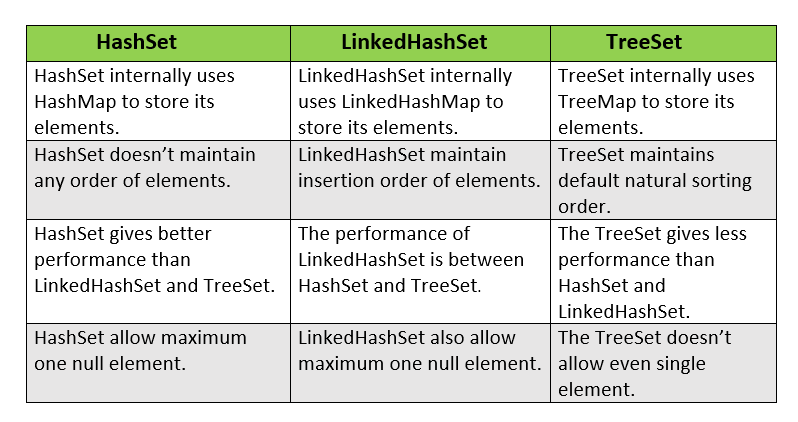 Question 87.
What is the difference between the Comparable and Comparator interface?
Answer:

Question 91.
What are the differences between HashMap and HashTable?
Answer:

Question 92.
What is the difference between Collection and Collections?
Answer:
The Collection is an interface that can be used to represent a group of individual objects as a single entity whereas Collections is a utility class present in java.util package. The Collections defines several utility methods(like searching and sorting) for collection objects.

Question 96.
What is the purpose of the transient keyword?
Answer:
Transient is a keyword in Java that is used in Serialization. It is applicable only for variables. At the time of serialization if you don’t want to serialize the value of a particular object for security concern then we should go for the transient keyword in Java. At the time of serialization when we declared a variable as transient JVM ignore the original value of a transient variable and set a default value to the file. Hence we can say that transient means not to serialize.

Question 97.
What is an object graph in Serialization?
Answer:
Whenever we are serializing an object the set of all object that contains the reference from that object will be serialized automatically. This group of a set is known as Object Graph. In Object Graph every object should be serializable. If at least one object is non-serializable then we will get a runtime exception saying NotSerializableException. 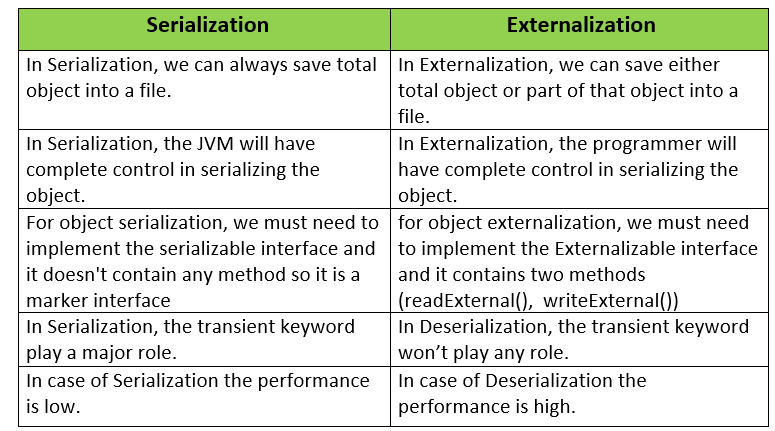