We have compiled most frequently asked .NET Interview Questions which will help you with different expertise levels.

Question 1.
What is XML? (B)What is XML?
Answer:
XML (Extensible Markup Language) is all about describing data. Below is a XML, which describes invoice data.

An XML tag is not something predefined but it is something you have to define according to your needs. For instance, in the above example of the invoice, all tags are defined according to business needs. The XML document is self-explanatory; anyone can easily understand looking at the XML data what exactly it means.

Question 2.
What is the version information in XML?
Answer:
“Version” tag shows which version of XML is used.

Question 4.
If XML does not have a closing tag will it work?
Answer:
No, every tag in XML, which is opened, should have a closing tag. For instance, at the top, if I remove the </discount> tag that XML will not be understood by a lot of applications.

Question 7.
Is XML meant to replace HTML?
Answer:
No, they both go together one is for describing data while the other is for displaying data.

Question 8.
Can you explain why your project needed XML?
Answer:

You can give a scenario of two applications, which are working separately, and how you chose XML as the data transport medium.

Question 9.
What is DTD (Document Type Definition)?
Answer:
It defines how your XML should structure. For instance, in the above XML, we want to make it compulsory to provide “qty” and “total cost”, also that these two elements can only contain numeric. Therefore, you can define the DTD document and use that DTD document within that XML.

Question 10.
What is well-formed XML?
Answer:
If an XML document is confirming to XML rules (all tags started are closed, there is a root element, etc) then it is a well-formed XML.

Question 12.
What is the CDATA section in XML?
Answer:
All data is normally parsed in XML but if you want to exclude some elements, you will need to put those elements in CDATA.

Question 14.
What is element and attributes in XML?
Answer:
In the below example invoice is the element and the in number the attribute.

Question 15.
Which are the namespaces in .NET used for XML?
Answer:
“System.xml.dll” is the actual physical file, which has all XML implementation. Below are the commonly used namespaces:

There are two standard specifications, which are very common and should be followed by an XML parser:

DOM Is a W3C (World Wide Web Consortium) recommended way for creating XML documents. In DOM, we load the entire XML document into memory and allows us to manipulate the structure and data of the XML document. 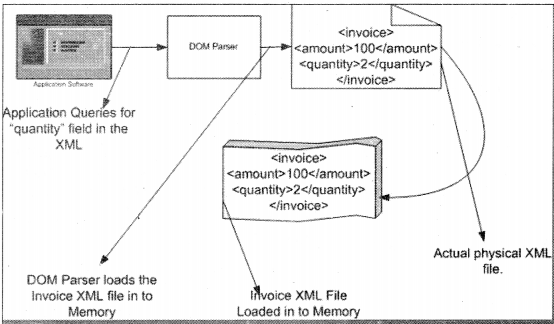 Figure 18.2 is a pictorial representation of how the DOM parser works. Application queries the DOM Parser for the “quantity” field. DOM parser loads the complete XML file into memory. 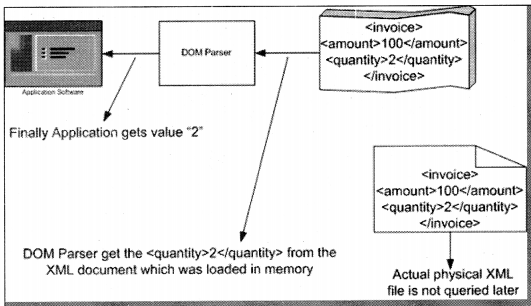 DOM parser then picks up the “quantity” tag from the memory-loaded XML file and returns back to the application. 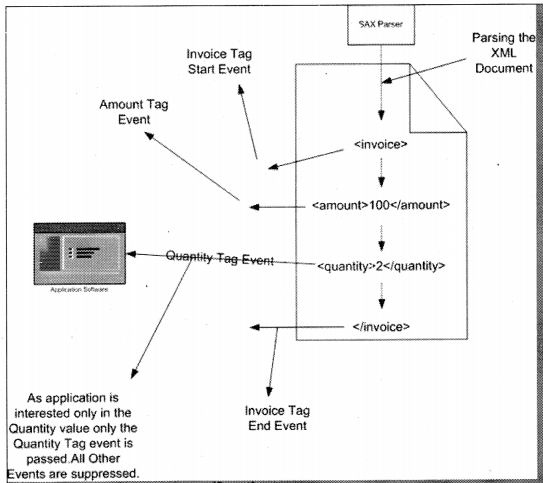 Question 17.
In what scenarios will you use a DOM parser and SAX parser?
Answer:

Question 18.
How was XML handled during COM times?
Answer:
During COM, it was done by using MSXML (Microsoft extensible Markup Language) 4.0. So old > languages like VB6, VC++ used MSXML 4.0, which was shipped with SP1 (Service Pack 1).

XML readers: With XML readers, the client application gets a reference to instances of reader class. Reader class allows you to scroll forward through the contents like moving from node to node or element to element. You can compare it with the “SqlDataReader” object in ADO.NET, which is forward only, in short, XML reader allows you to browse through the XML document.

XML writers: Using XML writers, you can store the XML contents to any other storage media. For instance, you want to store the whole in-memory XML to a physical file or any other media. 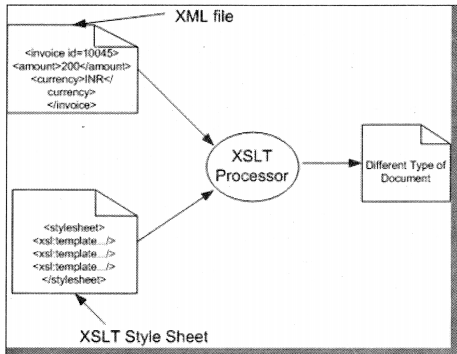 You can see in Figure 18.4 how the XSLT processor takes the XML file and applies the XSLT transformation to produce a different document.

Question 22.
Define XPath?
Answer:
It is an XML query language to select specific parts of an XML document. Using XPath, you can address or filter elements and text in an XML document. For instance, a simple XPath expression like “Invoice/ Amount” states find “Amount” node that is Chilean of “Invoice” nodes.

Question 23.
What is the concept of XPointer?
Answer:
XPointer is used to locate data within XML document. XPointer can point to a particular portion of a XML document, for instance
address.xmlttxpointer (/descendant: : streetnumber[@id=9])
So the above XPointer points street number=9 in “address .xml”.

Question 24.
What is an XMLReader Class?
Answer:
It is an abstract class available from the System.XML namespace. XML reader works on a read-only stream browsing from one node to other in a forward direction. It maintains only a pointer to the current node but has no idea of the previous and the next node. You cannot modify the XML document, you can only move forward.

Question 25.
What is XMLTextReader?
Answer:
The “XmlTextReader” class helps to provide fast access to streams of XML data in a forward-only and read-only manner. It also checks if the XML is well-formed. However, XMLTextReader does not validate against a schema or DTD (Document Type Definition) for that you will need “XmlNodeReader” or “XmlValidatingReader” class.

The instance of “XmlTextReader” can be created in a number of ways. For example, if you want to load the file from a disk you can use the below snippets.
XmlTextReader reader = new XmlTextReader (filename);

To loop through all the nodes you need to call the “read ().” method of the “XmlTextreader” object, “read ()” method returns “true” if there are records in the XML document or else it returns “false”.

To read the content of the current node on which the reader or/ect is you use the “value” property. As shown in the above code “data” gets the value from the XML using “reader . Value”.

Question 26.
How do we access attributes using “XmlReader”?
Answer:
The below snippets shows the way to access attributes. First in order to check whether there any attributes present in the current node you can use the “HasAttributes” function and use the “MoveToNextAttribute” method to move forward in attribute, in case you want to move to the next element use “MoveToElement () “.

Both the projects have the command button “CmdLoadXML” which has the logic to load the XML file and display the data in the message box (See Figure 18.6). I have pasted only the “CmdLoadXML” command button logic for simplicity. Following are the basic steps done: 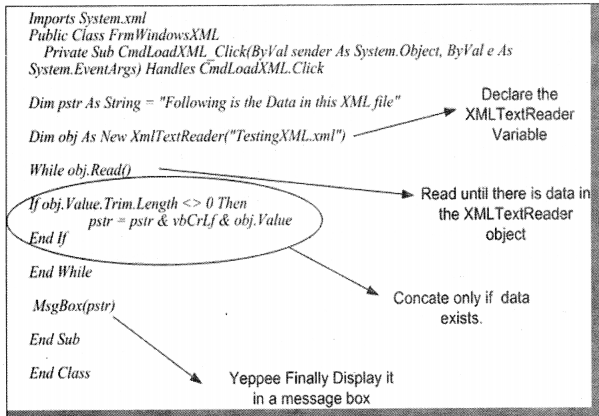 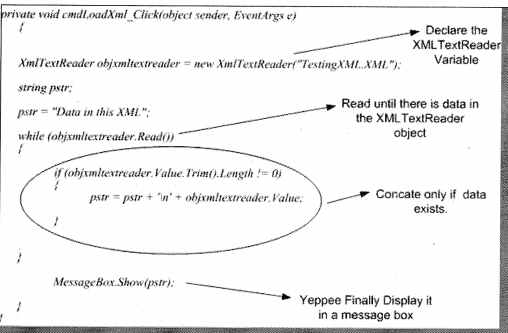 Question 28.
What does XmlValidatingReader class do?
Answer:
XmlTextReader class does not validate the contents of an XML source against a schema. The correctness of XML documents can be measured by two things is the document is well-formed and is valid. Well-formed means that the overall syntax is correct. Validation is much deeper which means is the XML document is proper with respect to the schema defined. 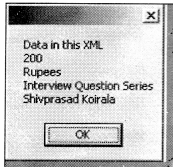