xml interview questions: We have compiled most frequently asked SQL Server Interview Questions which will help you with different expertise levels.

Question 1.
What is XML?
Answer:
XML (Extensible markup language) is all about describing data. Below is a XML which describes invoice data.

An XML tag is not something predefined but it is something you have to define according to your needs. For instance in the above example of invoice all tags are defined according to business needs. The XML document is self explanatory, any one can easily understand looking at the XML data what exactly it means.

Question 2.
What is the version information in XML?
Answer:
“version” tag shows which version of XML is used.

Question 3.
What is ROOT element in XML?
Answer:
In our XML sample given previously <invoicex/invoice> tag is the root element. Root element is the top most element for a XML. .

Question 4.
If XML does not have closing tag will it work?
Answer:
No, every tag in XML which is opened should have a closing tag. For instance in the top if I remove </discount> tag that XML will not be understood by lot of application.

Question 7.
Is XML meant to replace HTML?
Answer:
No they both go together one is for describing data while other is for displaying data.

Question 8.
Can you explain why your project needed XML?
Answer:

Question 9.
What is DTt> (Document Type definition)?
Answer:
It defines how your XML should structure. For instance in the above XML we want to make it compulsory to provide “qty” and “totalcost”, also that these two elements can only contain numeric. So you can define the DTD document and use that DTD document with in that XML.

Question 10.
What is well formed XML?
Answer:
If a XML document is confirming to XML rules (all tags started are closed, there is a root element etc) then it’s a well formed XML.

Question 11.
What is a valid XML?
Answer:
If XML is confirming to DTD rules then it’s a valid XML.

Question 12.
What is CDATA section in XML?
Answer:
All data is normally parsed in XML but if you want to exclude some elements you will need to put those elements in CDATA,

Question 13.
What is CSS?
Answer:
With CSS you can format a XML document.

Question 15.
What is Element and attributes in XML?
Answer:
In the below example invoice is the element and the invnumber the attribute.
<invoice invnumber=1002></invoice> 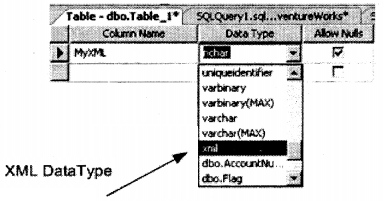 Question 17.
How do we specify the XML data type as typed or untyped?
Answer:
If there is a XSD schema specified to the data type then it’s typed or else it’s untyped. If you specify XSD then with every insert SQL Server will try to validate and see that is the data adhering to XSD specification of the data type.

Question 18.
How can we create the XSD schema?
Answer:
Below is the DDL statement for creating XML schema.

After you have created the schema you see the MYXSD schema in the schema collections folder. 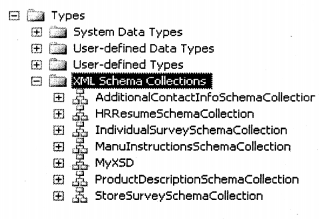 When you create the XML data type you can assign the MyXsd to the column. 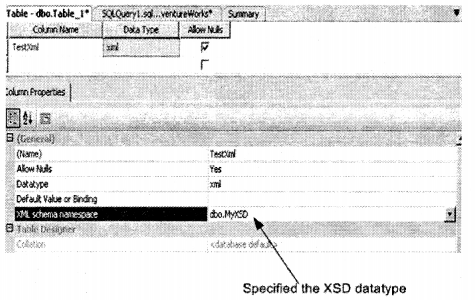 Question 19.
How do I insert in to a table which has XSD schema attached to it?
Answer:
I know many developers will just say what the problem with simple insert statement. Well guys its not easy with attaching the XSD its now a well formed datatype.The above table I have named as xmltable. So we had specified in the schema two nodes one is ordered and the other customername. So here’s the insert.
Insert into xmltable values ( ‘ <MyXSD xmlns=’’http: //MyXSD” ><Orderid>l</ Orderid><CustomerName>Shiv</CustomerNamex/MyXSD> ’)

Question 20.
What is maximum size for XML datatype?
Answer:
2 GB and is stored like varbinary.

Question 21.
What is Xquery?
Answer:
In a typical XML table below is the type of data which is seen. Now I want to retrieve orderid “4”. I know many will jump up with saying use the “LIKE” keyword. Ok you say that an interviewer is very sure that you do not know the real power of XML provided by SQL Server.

Well first thing XQUERY is not that something Microsoft invented, it’s a language defined by W3C to query and manipulate data in a XML. For instance in the above scenario we can use XQUERY and drill down to specific element in XML.
So to drill down here’s the XQUERY

Question 22.
What are XML indexes?
Answer:
XML data types have huge size 2 GB. But first thing is that you should have a primary key on the XML data type column. Then you can use the below SQL statement to create index on the XML column:-

Question 24.
What is FOR XML in SQL Server?
Answer:
FOR XML clause returns data in XML rather than simple rows and columns. For instance if you fire the below query on any table you will get XML output:-
SELECT * FROM MyTable FOR XML AUTO

Question 25.
Can I use FOR XML to generate SCHEMA of a table and how?
Answer:
The below SQL syntax will return the SCHEMA of the table.

Question 26.
What is the OPENXML statement in SQL Server?
Answer:
We had seen that FOR XML returns a XML format of a table data. And open XML does the vice versa of it. If you pass XML document to it will convert it to rows and columns.

Question 27.
I have a huge XML file which we want to load in database?
Answer:
Twist: – Can I do a BULK load of XML in database?
Below is the SQL statement which will insert from “MyXml.xml” in to “MyTable”.

You can call a stored procedure using HTTP SOAP. This can be done by creating END POINTS using the “CREATE ENDPOINT” DDL statement. I have created a TotalSalesHttpEndPoint which can be called later through “webservices”.

Question 29.
What is XMLA?
Answer:
XMLA stand for XML for Analysis Services. Analysis service is covered in depth in data mining and data ware housing chapters. Using XMLA we can expose the Analysis service data to the external world in XML. So that any data source can consume it as XML is universally known.