Python oop interview questions: We have compiled most frequently asked Python Interview Questions which will help you with different expertise levels.

Question 1.
What can you do with python?
Answer:
There is no limit to what can be achieved with the help of Python Programming:

Question 4.
What do you mean when you say that Python is an interpreted language?
Answer:
When we say that Python is an interpreted language it means that python code is not compiled before execution. Code written in compiled languages such as Java can be executed directly on the processor because it is compiled before runtime and at the time of execution it is available in the form of machine language that the computer can understand. This is not the case with Python. It does not provide code in machine language before runtime. The translation of code to machine language occurs while the program is being executed.

Question 5.
Are there any other interpreted languages that you have heard of?
Answer:
Some frequently used interpreted programming languages are as follows:

Question 8.
Is it true that Python can be easily integrated with C, C++, COM, ActiveX, CORBA, and Java?
Answer:
Yes

Question 10.
Draw a comparison between Java and Python.
Answer:

1. Java is compiled and Python is interpreted:
Both Java and Python are compiled down to the byte code on the virtual machine. However, in the case of Python, this happens automatically during runtime whereas Java has a separate program – javac to accomplish this task. This also means that if speed is the major concern in your project then Java may have an edge over Python but you cannot deny that Python allows faster development (as you will leam in the next point).

2. Java is Statistically typed and Python is dynamically typed:
While coding in Python, it is not required to declare the type of the variable. This makes Python easy to write and read but it can be difficult to analyze. The developer is able to code faster and the task can be accomplished in fewer lines of code. Developing applications in Python can be much faster Python than Java. However, Java’s static type system makes it less prone to bugs.

5. Both Java and Python have a strong community and library support:
Both are open source languages having communities that are offering support and contribution to the language. You can easily find a library for almost anything.

6. Python can be more budget-friendly:
Since Python is dynamically typed, it makes development a fast process as a result of which developers can expect to develop an application in a record time thereby lowering down the cost of development.

7. Java is the more preferred language in mobile development:
Android app development is mostly done using Java and XML. However, there are libraries like Kivy which can be used along with Python code in order to make it compatible with android development.

8. Python is preferred for Machine learning, the Internet of things, ethical hacking, data analysis, and artificial intelligence:
Python has very specialized libraries and general flexibility and hence it has become the number one choice for projects that have a bias towards deep learning, machine learning, and image recognition.

9. Java and Python both support OOP:

10. LOC in Java is more than in Python: Let’s have a look at how we would go about printing simple Hello World in Java:

11. Java is more difficult to learn as compared to Python:
Python was developed with the main focus on making it easy to learn.

12. Java is stronger when it comes to connectivity with database:
The database access layer of Java is very strong and is compatible with almost any database. Python database connectivity is not as strong as Java.

13. Security:
Java gives high priority to security which is why it is a preferred language for applications that require security but a good developer can code a secure application in Python also.

1. You can start an interactive interpreter from the command line and start writing the instructions after the »> prompt.

2. If you intend to write a code of several lines then it would be a wise decision to save your file or script with the .py extension and you can execute these files from the command line. Multiline programs can be executed on an interactive interpreter, also but it does not save the work.

Question 12.
What is the function of the interactive shell?
Answer:
The interactive shell stands between the commands given by the user and the execution done by the operating system. It allows users to use easy shell commands and the user need not be bothered about the complicated basic functions of the Operating System. This also protects the operating system from incorrect usage of system functions.

Question 15.
What is the purpose of indentation in Python?
Answer:
Indentation is one of the most distinctive features of Python. While in other programming languages, developers use indentation to keep their code neat but in the case of Python, indentation is required to mark the beginning of a block or to understand which block the code belongs to. No braces are used to mark blocks of code in Python. Blocks in code are required to define functions, conditional statements, or loops. These blocks are created simply by the correct usage of spaces. All statements that are the same distance from the right belong to the same block. 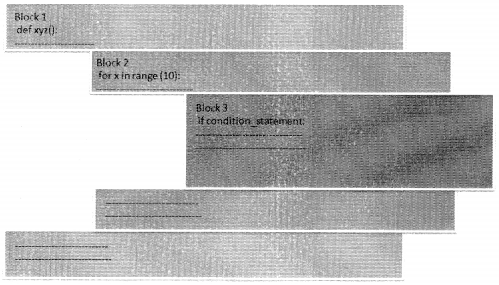 Question 16.
Explain Memory Management in Python.
Answer:
Memory management is required so that a partial or complete section of the computer’s memory can be reserved for executing programs and processes. This method of providing memory is called memory allocation. Also, when data is no longer required, it must be removed. Knowledge of memory management helps developers develop efficient code.

Python makes use of its private heap space for memory management. All object structures in Python are located in this private heap (which is not accessible by the programmer). Python’s memory manager ensures that this heap space is allocated judiciously to the objects and data structures. An in-built garbage collector in Python recycles the unused memory so that it is available in heap space.

Everything in Python is an object. Python has different types of objects, such as simple objects which consist of numbers and strings, and container objects such as diet, list, and user-defined classes. These objects can be accessed by an identifier- name. Now, let’s have a look at how things work.
Suppose, we assign the value of 5 to a variable a:
a = 5
Here, ‘5’ is an integer object in memory, and ‘a’ has reference to this integer object. 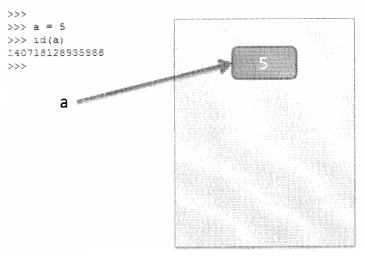 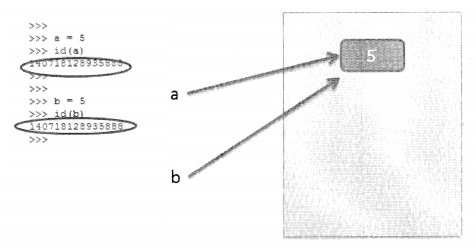 Now, let us say:
c = b.
This means, c too will have reference to the same object. 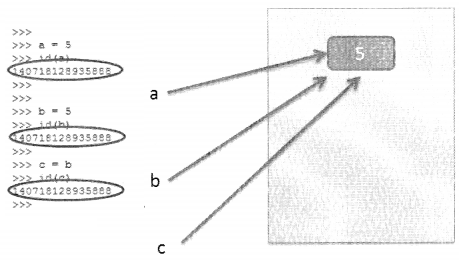 Now, suppose we perform the following operation: a =a+1

This means that a is now equal to 6 and now refers to a different object. 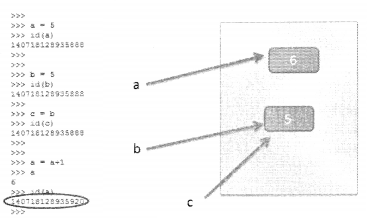 The memory assigned to the interpreter is divided into the following: 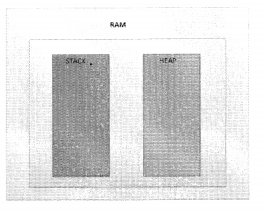 Now let’s have a look at how things work with the help of an example. Look at the following piece of the code:

Now, let’s see how this works. The program’s execution starts from the main which in this case is:

Step 1: execute x =5
This creates integer object 5 in the heap and reference to this object i.e. x is created in the main stack memory. 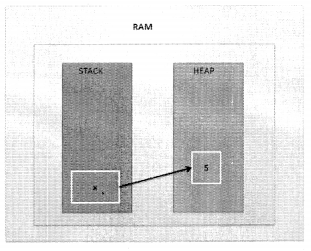 Step 2: is to execute final_value = function1(x)
This statement calls function1( ).

In order to execute function1 ( ) a new stack frame is added to the memory. Till the time function1( ) is being executed the lower stack frame of x referencing to 5 is put on hold. The integer value 5 is passed as a parameter to this function. 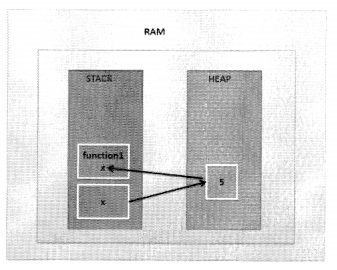 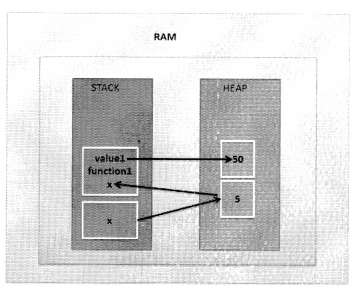 Here function2( ) is called to evaluate a value that needs to be passed on to value2. In order to accomplish this, another memory stack is created. The integer object value1 having a value of 20 is passed as a reference to function2. 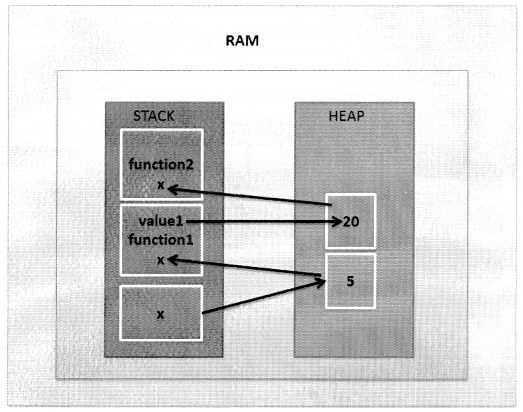 The function function2( ) evaluates the following expression and returns the value: 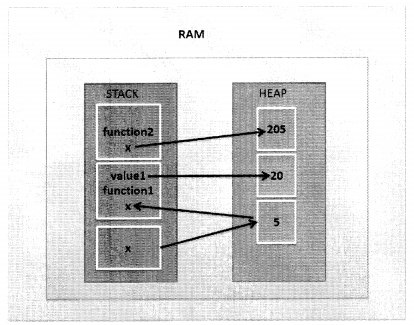 The function function2( ) is fully executed and value 205 is assigned to value2 in function 1. So, now the stack for function(2) is removed. 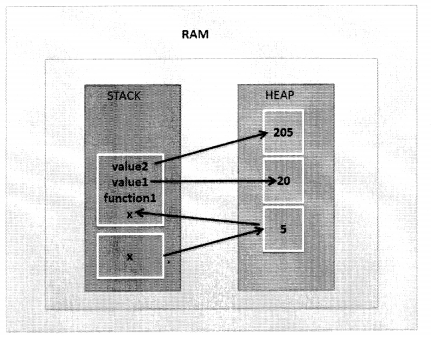 Now, function1( ) will return the value 205 and it will be assigned to the final_value in the main stack. 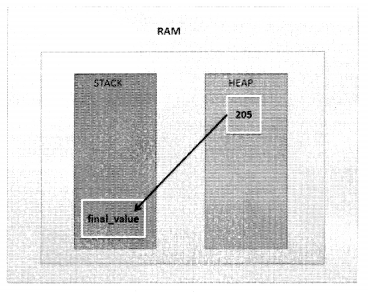 Here it is important to note that you would see that x exists in the main as well as in different functions but the values don’t interfere with each other as each x is in a different memory stick.

Garbage collection on the other hand allows Python to free and reclaim blocks of memory that are no longer of any use. This process is carried out periodically. The garbage collector runs while the program is being executed and the moment the reference count of an object reaches zero, the garbage collector is triggered.

Question 18.
What are multi-line statements?
Answer:
All the statements in Python end with a newline. If there is a long statement, then it is a good idea to extend it over multiple lines. This can be achieved using the continuation character (\).

Question 19.
What are the types of error messages in Python?
Answer:
While working with Python you can come across:

Question 21.
What is a comment?
Answer:
A comment is one or more statements used to provide documentation or information about a piece of code in a program. In Python one-line comments start with ‘#’.

Question 23.
How is Python executed?
Answer:
Python files are compiled to bytecode, which is then executed by the host.
Alternate Answer: Type python <sourcefile>.py at the command line.

Question 24.
What is the difference between .py and .pyc files?
Answer:
.py files are Python source files, .pyc files are the compiled bytecode files that are generated by the Python compiler

Question 26.
How are Python blocks defined?
Answer:
By indents or tabs. This is different from most other languages which use symbols to define blocks. Indents in Python are significant.

Question 27.
What is the Python interpreter prompt?
Answer:
Three greater-than signsQuestion>>> Also, when the interpreter is waiting for more input the prompt changes to three periods …

Question 28.
How do you execute a Python Script?
Answer:
From the command line, type python <scriptname>.py or pythonx.y <scriptname>.py where the x.y is the version of the Python interpreter desired.

Question 29.
Explain the use of tryQuestionexceptQuestionraise, and finally:
Answer:
Try, except and finally blocks are used in Python error handling. Code is executed in the try block until an error occurs. One can use a generic except block, which will receive control after all errors, or one can use specific exception handling blocks for various error types. Control is transferred to the appropriate except block. In all cases, the final block is executed. Raise may be used to raise your own exceptions.

Question 30.
Illustrate the proper use of Python error handling.
Answer:
Code Example
try:
… # This can he any code
except:
… # error handling code goes here
finally:
… # code that will be executed regardless of exception handling goes here.

Question 31.
What happens if an error occurs that is not handled in the except block?
Answer:
The program terminates, and an execution trace is sent to sys. stderr.

Question 32.
How are modules used in a Python program?
Answer:
Modules are brought in via the import statement.

Question 33.
How do you create a Python function?
Answer:
Functions are defined using the def statement. An example might be deffoo(bar):

Question 34.
How is a Python class created?
Answer:
Classes are created using the class statement. An example might be class aardvark(foobar):

Question 35.
How is a Python class instantiated?
Answer:
The class is instantiated by calling it directly. An example might be myclass=aardvark(5)

Question 36.
In a class definition, what do the init ( ) functions do?
Answer:
It overrides any initialization from an inherited class and is called when the class is instantiated.

Question 38.
What happens when a function doesn’t have a return statement? Is this valid?
Answer:
Yes, this is valid. The function will then return a None object. The end of a function is defined by the block of code is executed (i.e., the indenting) not by any explicit keyword.