In the previous chapter, although we briefly discussed the scripting mode of the Python interpreter, we mostly worked with Python in interactive mode. It is definitely useful in getting acquainted with the features and syntax of Python especially while learning. It doesn’t prove to be useful though if you want to execute a certain set of instructions repeatedly. In case, if you want to automate a certain process, scripting mode is needed. As we saw in the previous chapter, the script is executed from the command prompt as follows (figure 2.1) :

A program is a set of instructions, which is saved as a script and can be executed together as and when needed. A Python program is simply a text file with .py extension and contains one or more Python statements. Statements are executed in the order in which they are written in script.

Statements in a program follow input-process-output patterns sequentially. However, it is useful only in very simplistic problems, where one or more inputs are collected, processed and, the result of the process is displayed. More realistic and real-world problems require appropriate decisions to be taken depending on varying situations. In other words, we definitely want the program to have a ‘decision’ taking ability.

Many a time an entire process, or a part of it, maybe required to be executed repeatedly until a situation arrives or is encountered. In such a case, the default sequential flow of the program is diverted back to one of earlier statements, thereby constituting a ‘loop’.

The decision statements and looping statements are essential parts of any programming language. In this chapter, you will learn to use Python keywords implementing decision control (if, else, and elif) and repetition control (while and for).

Both these programming constructs, decision and repetition controls are implemented conditionally i.e. based on whether a certain logical expression evaluates to a Boolean value (True or False). Python uses a set of comparison operators to form a logical expression.
The symbols >, <, >=, and <= carry their conventional meaning. The ‘==’ symbol is defined as ‘is equal to’’ operator that returns True if both operands are equal and False otherwise. The ‘!=’ symbol acts as the opposite. It may be called ‘not equal to5 operator

Python’s keywords to construct conditional statements are more or less similar to those found in other languages such as C/C++, Java, and so on. The same is with the repletion control statements. Python has keywords – while and for – using which a loop can be formed in a program. While their usage is similar to that of other languages, there are certain Python-specific changes.
As mentioned at the beginning of this chapter, by default the statements in a program are executed sequentially. However, instead of going to the next instruction, if the program flow redirected to any of the earlier steps, it results in repetitive execution of part of statements in the script. 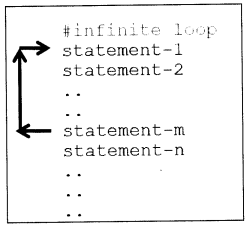 If, as shown in figure 2.5, we somehow manage to make the program go back to statement-1 after statement-m (instead of next in line), the result will be a continuous execution of statements 1 to m which won’t stop on its own and it forms a loop called as an infinite loop. Obviously, this situation is never desired. Instead, we should have a mechanism by which repetition is conditional. The while keyword does exactly the same – it constructs a conditional loop.