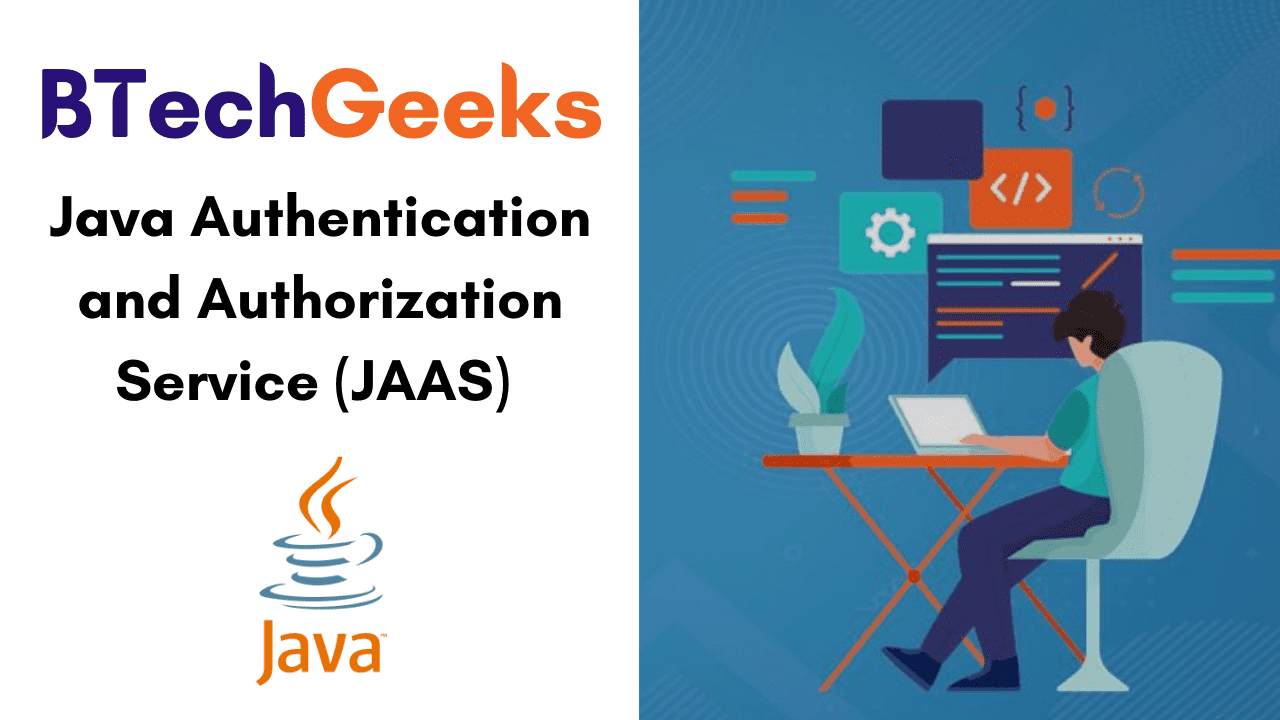 Java authentication and authorization services: Java Authentication and Authorization Service (JAAS) is the API, which provides flexible and scalable standard security features for your applications. JAAS helps in the enforcement of access control over the resources to be secured. With the release of JAAS, Java has evolved as the general-purpose language for the development of applications that need login and access control.

JAAS helps in the two important aspects of security – authentication, and authorization. Reliability and security can be assured by authenticating the user who is trying to access the access-controlled object or trying to execute the java code. The code may be running as an application, an applet, a bean, or a servlet. Authorization is assuring whether the user has the permission or privilege to do the action performed.

Features Supported by the Java Authentication and Authorization Service(JAAS)

How does JAAS Work?

While using a JAAS in an Application several SPIs are Involved.

CallBack Handler: It is used for collecting User Credentials and is optionally given while creating a LoginContext.

Configuration: It is responsible for loading LoginModule Implementations and can be given optional at the time of LoginContext Creation.

Login Module: It is used effectively for authenticating users.

We use default Implementation for Configuration API and provide our own implementations for both CallBack Handler and LoginModule APIs.

JAAS also provides reference LoginModule implementations and we can develop our switch modules. A simple configuration file is just enough to help in setting up the application with a choice of implementations. see figure below. 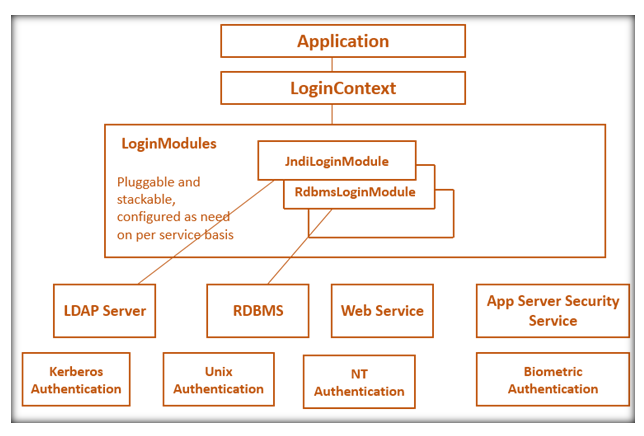 Before diving into the Login Module Implementation let’s get started with the CallBack Handler Implementation Interface for gathering the User Credentials. It includes a Single Method named Handler() that accepts an array of CallBacks. Java Authentication and Authorization Service use several implementations namely Name CallBack and Password CallBack, etc. for collecting the User Name and Passwords respectively.

In the same way, to prompt and read the password we use the following

For better understanding, we will provide a simple implementation storing the hard-coded users. It is called as Memory InLogin Module. 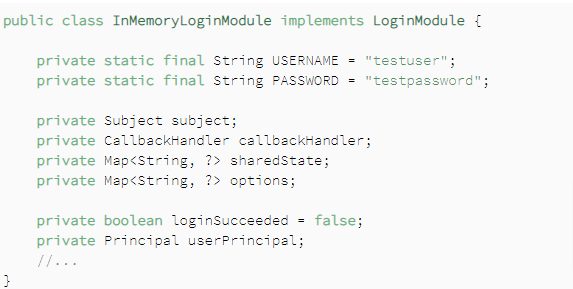 In the later modules let us learn in detail about the implementation of more important methods such as initialize(), login(), and commit().

Login Module is loaded at first and then initialized with a subject named CallBack Handler. In addition, LoginModules can use a Map for sharing data among themselves and one more Map for storing Private Configuration Data.

In the login() method we use a CallbackHandler.handle() Method with a Name CallBack and Password CallBack so as to prompt and retrieve the User Name and Password. Later, we will compare these Credentials with the hard-cored ones.

The login should return true for successful operation and a false for the failed login.

If all calls to LoginModule#login succeed then we will update the subject with one more principal.

Or else abort() method is called.

LoginModule implementation is ready to use and we can configure it so that it can be loaded dynamically using Configuration Service Provider.

JAAS uses the Configuration Service Provider in order to Load Login Modules during the run time. By default it uses ConfigFile Implementation in which Login Modules are configured through a Login File.

You can witness in the above example we have provided a fully qualified class name of the LoginModule Implementation, debugging option, and a required flag.

Note: You can also specify the login file using the java.security.auth.login.config system property:

Authority Granter is the one responsible for inspecting a principal and returning a Set of Strings denoting the authorities assigned to the principal. For each of the returned Authority String JAAS AbstractJaasAuthenticationProvider creates a JaasGrantedAuthority having the authority string and the JAAS principal that the AuthorityGranter was passed. JAAS Authentication Provider gets the JAAS Principals by successfully authenticating the user credentials taking the help of the JAAS LoginModule and then accesses the LoginContext and returns.

A call to LoginContext.getSubject().getPrincipals() is made for each and every resulting principal passed to Authority Granter defined against the AbstractJaasAuthenticationProvider.setAuthorityGranters(List) Property.