Question 1.
Examine Toyabee’s theory of Social Change.
OR
What is Toynbee’s theory of ‘Chafleage’ and ‘Response’?
Answer:
Arnold Toynbee, like Sorokin, presented a theory which has some cyclical features. Toynbee’s theory is expounded in ‘A Study of History’ and its cyclical character is expressed in the conception of the growth, arrest and decay of civilization but the theory is perhaps, in a more fundamental sense, linear, for according to Toynbee the different civilisations though they are certainly seperate individuals, are also representatives of a single species and are also engaged upon an identical enterprise. The differentiating yang- – movement of growth is leading towards a goal which is a yin-state of integration.

The process of growth and decay (according to Toynbee) of civilisation is a vehicle of progressive religious revelation, and its consummation a ‘Communion with God’. In the work of Toynbee (like that of P.A. Sorokin) the mass of historical analogic, and the araelar style, obscure the analysis of historical change, despite the many illuminating comments upon particular social transformations. His theory represents a return to philosophy of history in the grand manner.

The theory of social change involving the concepts of ‘challenge’ and ‘response’, formulated by Toynbee is basically linear but with certain modifications and limitations, it inclines towards the approach of cyclical explanation of social change. In his Study of History, ge seeks the general causes of the rise and fall of civilizations. Toynbee contends that, societies present challenges to their populations and so long as a “creative minority” exists to meet the challenges, societal growth may continue. The idea of challenge and response as causative forces runs strongly through his work, and he makes interesting comparisons between the Greco-Roman World of antiquity arid contemporary Western civilisation. His work amounts to a vast summary of historical cultural systems. His theory of social change can be visualised more clearly through following figure: 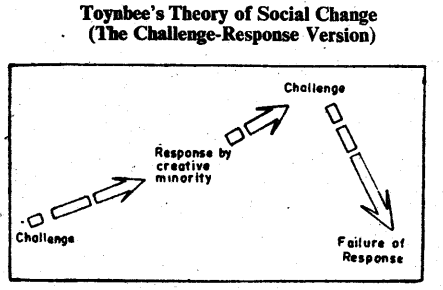 Arnold Toynbee, a supporter of the cyclic theory is of the view that world civilisation has passed through stages which correspond to youth, maturity and decline. In the first stage, there is response to challenges, in the second stage there is some trouble while in the third stage there is degeneration. He is of the view that our civilisation has reached its last stage but can be saved if there is proper guidance by a select group of leaders who are not corrupt and are spiritually strong. Such people can only inspire the confidence of the people.

Toynbee, while explaining the cyclic trend insists that ‘the first challenge presented to the new born Hellenic civilisation was the challenge of chaos and ancient light. It was victoriously met, it was decided that Hallas should be a world of cities and not villages, of agriculture and not of pastures, of order and not of anarchy, yet the very success of their response to their challenge exposed the victors to a second and Malthusian problem. The response was in terms of Hellenic expansion though impeded in the 6th century due to series of causes. Thereafter, the Hellenic society was on the defensive, assaulted by the Persians and Carthegians. The breakdown marked by Athteni on Peloponnesian was followed neverthless by a fresh outburst of geographical expansion.

An example of the reverse is the society in Europe where the people remained content with the implements of rough workmanship, but it developed a fine aesthetic sense’. He further explains that ‘the history of development of technique, like the histoiy of geographical expansion, has failed to provide us with a criterian of the growth of civilisations, but it does reveal a principle by which a technical progress is governed, which may be described as a law of progressive simplification. The pouderous and bulky steam engine with its elaborate permanent way is replaced by the neat and handy combustion engine. The Copernican astronomy which has replaced the polemic system presents, in far geometrical terms an equally coherent explanation of a vastly wider range of movement of heavenly bodies.

Simplification commotes ommissions and eliminations whereas what has happened in each of the above cases is not a diminition but an enhancement of practical efficiency or of an aesthetic satisfaction or of intellectual grasp’. Toynbee concludes his view thus, “We conclude that a given series of successful responses to successive challenges is to he interpreted as a manifestation of growth if, as the series proceeds, the action tends to shift from the field of an external environment physical or human, to the interior of the growing personality or civilisation.” In other words, “the criterian of growth is progress towards self-determination and progress towards self-determination is a prosaic formula for describing the miracle by which life enters into its kingdom.”

Critical Evaluation. ” Like other cyclical thought Toynbee’s explanation has also been criticised as based on philosophical thinking rather on scientific studies. Though his works amounts to a vast summary of historical-cultural systems but has been criticised as proving points by a careful selection of examples. It also ends in a kind of historical mysticism, expecting a new age of religion to same humanity from its impending doom but not explaining how this new age of faith is to come about.

Inspite of these criticisms, the theory has a great sociological value.