Question 1.
Define counselling and discuss its needs and importance in modern organisations.
Or
What is meant by counselling ? State its nature and importance.
Answer:
Counselling Meaning And Importance:
Concept, of counselling. Organisations are social entities where employees execute their jobs in groups. Every employee differs in nature, attitudes, and feelings with other employees. These differences may cause misunderstanding resulting sometimes in emotional conflicts which is certainly not a healthy sign of good employee management relations. Conflicts may be between employee and employee or between supervisor and employee or between supervisor and manager. The conflint must be resolved better through counselling.

Keith Davis has defined counselling “Discussion of an emotional problem with an employee with the general objective of decreasing it.” The definition has the following three implications –

Counselling refers to a process of advising an employee by listening his problem and enabling him to find from his own thinking and talking a solution of the problem which is satisfactory to himself. The main objective of counselling is to understand and minimise an employee’s emotional difficulty.

Nature of Counselling. Counselling is an integral part of human resource management. In the context of industrial life, it has the following features.

Need and Importance of Counselling: We come across several people who have emotional disorder. Some of them are alcoholics as they are unable to cope with their environment. While some of them may have temporary upsets resulting from events such as broken marriage or strained relations with their colleagues or superiors, Such emotions are sometimes very disastrous even to their own interest and/or those of the organisation.

Such a person may leave the organisation because of a minor conflict which seems very .large to them or they produce behaviour which is undesirable from organisation point of view. Employer counselling is of immense importance under these circumstances.

1. Conflict. Emotional disorder may be caused by interpersonal and intergroup conflicts. People in the organisation interact with fellowmen from different background, values, points of view needs and personalities, it is very likely that a variety of conflict will develop. It may be due to organisational change because it changes relationship among people. Thus, conflict is an inevitable part of the organizational life. For an ordinary person conflict is taken in negative sense, but it need not necessarily be viewed so.

2. Frustration. Frustration is the result of motivation drive being blocked to prevent from reaching a desired goals. The situation may harm the employee personally or the organisation if he fails to get his target or what is due to him. For example, a worker while on work is interrupted time and again and his goal for the day remains unfulfilled, he will fee! irritated and frustrated. The situation becomes more serious when it is long run frustration such as blocked opportunity for promotion.

Counselling can help remove frustration by helping employees choose mature coursers of action to overcome blockage preventing goal attainment. The counsellor can advise management the causes of frustration so that it may try to reduce or remove them.

3. Stress. Stress is a condition of strain on one’s emotions, thought processes, and/or physical conditions that seem to threaten one’s ability to cope with the environment. Stress on the job is desirable to some extent if it is a mild stress and not sustained over a long period of time. Excessive stress or stress over a long period of time many result in physical and emotional disorders and lowered effectiveness. Stress is also affected by the tolerance power of the person concerned. If a person can bear the stress, he can improve his effectiveness and find innovative methods.

There are several causes of stress on the job and off the job. The main causes of stress on the job are job itself (work over load, pressure of work with which they cannot cope, tension and insecurity) role conflicts and role ambiguity. Conflicts with people mainly with the supervisor or any other authority who may affect their career. Stress may also arise off the job e.g. family problems or financial problems.

Question 2.
Discuss the functions of employee counselling.
Answer:
Functions Of Counselling :
The basic objective of counseling is to help employees to deal with their emotional problems so that they can improve their mental as well as physical health by reducing frustration and stress and developing self confidence, understanding, self control and ability to work effectively. This objective can be achieved well by performing various counselling functions. They are

1. Advice. The one of the functions of counselling is offering advice to the affected employee. As the counsellor (supervisor/manager) is quite un-concerned with the counsellor problem, he should understand the problem of the ‘counsellor’ completely, and then to suggest the necessary course of action.

2. Reassurance. Reassurance is a way of giving courage to worker to face a particular problem or to pose a confidence in himself that he is following the right path. When a supervisor/manager says ‘well you are making good progress’ or Don’t worry, go ahead,’ or ‘you are right’. These all are reassurances. But reassurances are useful when they are given at the right moment.

3. Release of Tension. Another important function of counselling is re-, lease of employee’s emotional tension. People tend to get an emotional release from their frustration, if they tell his emotional and other problems to a sympathetic listener or counsellor (may be supervisor/manager). They feel relaxed. However, the release of tension does not solve their problem completely, but release of tension removes mental blockage and give courage to the individual to force the problem boldly and think constructively.

4. Reorientation. It involves a change in the employee’s psychic itself through a change in basic goals, and values. Mainly, it needs a revision of the employee’s level of aspiration to bring it more in line with actual attainment. It is largely a job of professional counsellor. The manager of each unit must recognise those who are in need of reorientation so that timely help may be sought of professional counsellor.

5. Clarified Thinking. Clarified thinking is another function of counseling. Counselling encourages clarified thinking because emotional or mental blocks are cleared when employee narrates his problem to the counsellor. He think more rationally counselling brings the client to feel his responsibilities for his own problem and strives to be more realistic in solving them.

1. Directive Counselling. Directive counselling, as the name suggests, is a process where the counsellor directs the employer to solve their emo-tional problems through advice, reassurance, communication, release of tension. In this type of process of counselling, the counsellor listens employee’s problem or difficulty very patiently and then decides with the employee what to do and then motivating the employee to do that. The counsellor takes active part in discussing every aspect of the problem and helps in advising the solution and suggest the ways to get it. It is assumed that counsellor is superior to counsellee and knows better what to do. It is a counsellor centred counselling.

He should also not raise any blame, praise or doubts, during counselling, otherwise it is possible that the employee may not come out with his true feelings and the very purpose of counselling may be defeated. The counsellor throughout the session should attempt to ask discerning questions, restate ideas, clarify feelings and understand why these feelings exist. There exists a fluid and sensitive relationship between the counsellor and the counsellee that requires minute attention to every detail in the overall situations.

T.W. Harell has listed four technique which are often used by the counsellor in non-directive counselling—

Cooperative counselling applies four functions of counselling i.e, reas-surance, communication release of tensions and clarified thinking. It has no room for advice. If, in the opinion of counsellor, the counsellee needs reorientation he refers him to professional counsellor. If, in his opinion, he needs direct action. The manager as a direct superior and not as a counsellor takes the direct action.

Distinction Between Directive and Non-directive Counselling : 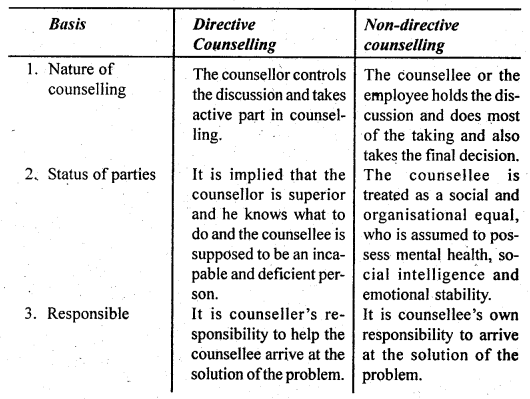 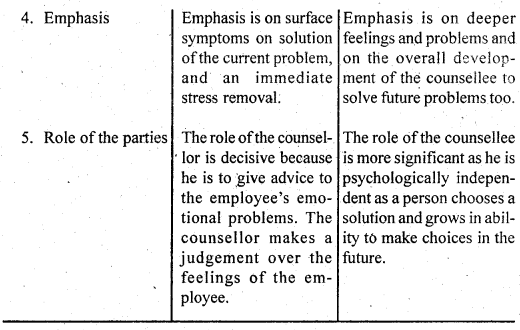