We have compiled most frequently asked .NET Interview Questions which will help you with different expertise levels.

Question 1.
How can we use COM Components in .NET?
Answer:
.NET components communicate with COM using RCW (Runtime Callable Wrapper). Following are the ways with which you can generate RCW: 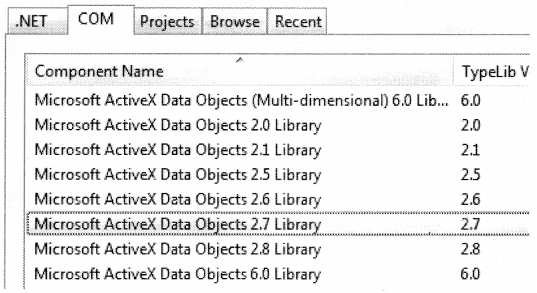 • Using interopservices .The system, runtime. Interopservic’es namespace contains class TypeLibConverter that provides methods to convert COM classes and interface into assembly metadata.
• Make your custom wrappers, if your COM component does not have a type library then the only way to communicate is by writing custom wrappers. That means communicating directly with COM components.

Question 2.
We have developed the COM wrapper do we have to still register the COM?
Answer:
Yes.

Question 3.
How can we use .NET components in COM?
Answer:
.NET components cannot be used in a straightforward way with COM. You will need to create CCW (COM Callable Wrapper) in order that COM components communicate with .NET assemblies. Following are the different approaches to implement it:

Question 4.
Following are different types of class attributes:
Answer:
None: No class interface is generated for the class. This is the default setting when you do not specify anything.

AutoDispatch: Interface that supports IDispatch is created for the class. However, no type of information is produced.

Auto Dual: A dual interface is created for the class. Type information is produced and made available in the type library.
Below in the source code we have used the third attribute.

Other than class, attributes defined up there are other attributes with which you can govern another part of the assembly. Example “GuidAttribute” allows you to specify the GUiD (Globally Unique identifier),
“ComVisibleAttribute” can be used to hide .NET types from COM etc. All attributes are not in the scope of the book as this is an interview questions book refer to MSDN (Microsoft Developer Network) for more details. 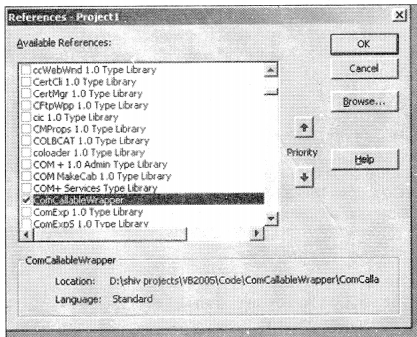 Below is a sample code for VB.NET, which uses sleep windows API for delaying.

Question 7.
What is COM?
Answer:
Microsoft’s COM is a technology for component software development. It is a binary standard, which is language independent. DCOM is a distributed extension of COM.

Question 9.
Can you describe the IUnknown interface in short?
Answer:
Every COM object supports at least one interface, the IUnknown interface. All interfaces are classes derived from the base class IUnknown. Each interface supports methods to access data and perform operations transparently to the programmer. For example, IUnknown supports three methods, AddRef, Released, and Querylnterf ace ( ). Suppose that pinterf is a pointer to an IUnknown.

Question 10.
Can you explain what DCOM is?
Answer:
DCOM (Distributed Component Object Model) differs from COM in that it allows for creating objects distributed across a network, a protocol for invoking that object’s methods, and secures access to the object. DCOM provides a wrapper around COM, hence it is a backwards compatible extension. DCOM uses Remote Procedural Calls (RPC) using Open Software Foundation’s Distributed Computing Environment.

These RPC are implemented over TCP/IP (Transmission Control Protocol/Internet Protocol) and named pipes. The protocol, which is actually being used, is registered just prior to use, as opposed to being registered at initialization time. The reason for this is that if a protocol is not being used, it will not be loaded. »

In order to inform an object that the client is still alive, periodic pinging is used. Hence, when the client has died and no ping has been received (to refresh it) before the expiration time, the server object will perform some clean up tasks (including decrementing its reference count).
Since RPC across a network are typically slow (compared to processes residing on the same machine), DCOM sends multiple requests in the same call. For example, in COM, the program performs a Queryinterf ace, one interface at a time. In DCOM, multiple Querylnterfaces are all clustered into one call.

This clustering optimization trick is also used when creating an instance of the object and serializing it with data. Since these two operations usually occur together, DCOM allows one method, which will perform both operations in one call without waiting for an acknowledgment from the first task before performing the second one.

Similarly, when a client pings its server object, he can do it in one call. Moreover, if there are multiple clients sending pings to multiple servers, an optimization is made where the multiple pings going to the same object are consolidated into just one ping. This is to cut down on the use of precious bandwidth used only for pinging.

The client has the control to set the computer, which will be responsible for the lifetime of the object. That is to say, these objects are not created just somewhere where the system resources and access privileges allow for it.

Call security is implemented in all four ways: authentication (to prevent false clients from impersonating the true client), authorization (to insure that a client only does what it is authorized to do), data integrity (to insure that data was not tampered with during transit), and data privacy (to insure that only designated sources can read it). The security issues are handled as they are on operating systems. The client gives the server various access privileges to access memory or disk space.

Question 11.
How do we create DCOM object in VB6?
Answer:
Using the CreateObject method, you can create a DCOM object. You have to put the server name in the registry. 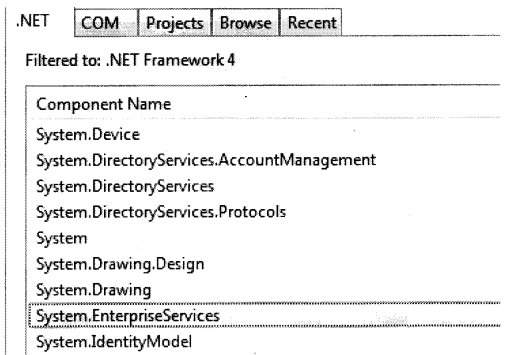 (For all transaction attribute look at the down question)
[Transaction (TransactionOption.RequiresNew) ]

Disabled: There is no transaction. COM+ does not provide transaction support for this component.

Not Supported: Component does not support transactions. Hence even if the calling component in the hierarchy is transaction enabled this component will not participate in the transaction.

Required: Components with this attribute require a transaction, i.e., either the calling should have a transaction in place else, this component will start a new transaction.

Question 13.
How do you do object pooling in .NET?
Answer:
COM+ reduces overhead by not creating object from scratch. So in CCM+ when object is activated it’s activated, from pool and when it has deactivated it is pushed back to the pool. Object pooling is configured by using the “ObjectPoolingAttribute” to the class.

No Compatibility: With this setting, new class ID’s, new interface ID’s and a new type library ID will be generated by VB each time the ActiveX component project is compiled. This will cause any compiled client components to fail (with error 429!) and report a missing reference to the ‘VB ActiveX Test Component’ when a client project is loaded in the VB IDE (Integrated Development Environment).

With this setting, VB will generate new interface ID’s for classes whose interfaces have changed, but will not change the class ID’s or the type library ID. This will still cause any compiled client components to fail (with error 429!) but will not report a missing reference to the ‘VB ActiveX Test Component’ when a client project is loaded in the VB IDE. Recompilation of client components will restore them to working order again.

VB makes it possible to extend an existing class or interface by adding new methods and properties, etc., and yet still retain binary compatibility. It can do this, because it silently creates a new interface ID for the extended interface and adds registration code to register the original interface ID but with a new Forward key containing the value of this new interface ID. COM will then substitute calls having the old ID with the new ID and hence applications built against the old interface will continue to work (assuming the inner workings of the component remain backward compatible!).

With this setting, Visual Basic will not change any of the existing class, interface or type library ID’s, however in order that it can do so, Visual Basic requires the project to specify an existing compiled version that it can compare against to eisure that existing interfaces have not been broken.

Question 15.
What is equivalent for regsvr32 exe in .NET?
Answer:
Regasm