Dictionaries are Python’s implementation of a data structure that is more generally known as an associative array. A dictionary consists of a collection of key-value pairs. Each key-value pair maps the key to its associated value.Keys are unique within a dictionary while values may not be.

Each key is separated from its value by a colon (:), the items are separated by commas, and the whole thing is enclosed in curly braces. An empty dictionary without any items is written with just two curly braces, like this: {}.

The values of a dictionary can be of any type, but the keys must be of an immutable data type such as strings, numbers, or tuples.Dictionary keys are case sensitive, same name but different cases of Key will be treated distinctly.

If we attempt to access a data item with a key, which is not part of the dictionary, we get an error as follows −

Adding elements to a Dictionary: 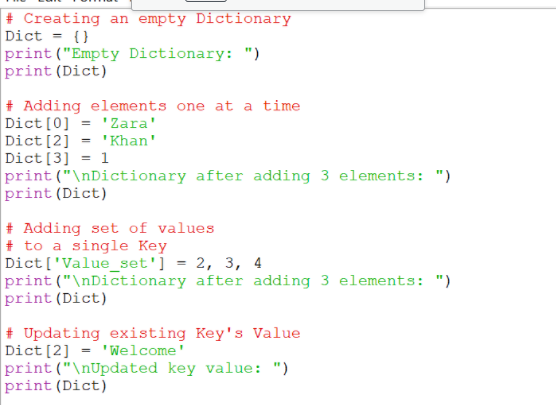 Accessing elements from a Dictionary:

In order to access the items of a dictionary refer to its key name.Key can be used inside square brackets.

Accessing element of a nested dictionary:

In order to access the value of any key in nested dictionary, use indexing []

ou can either remove individual dictionary elements or clear the entire contents of a dictionary. You can also delete entire dictionary in a single operation.

To explicitly remove an entire dictionary, just use the del statement. Following is a simple example − 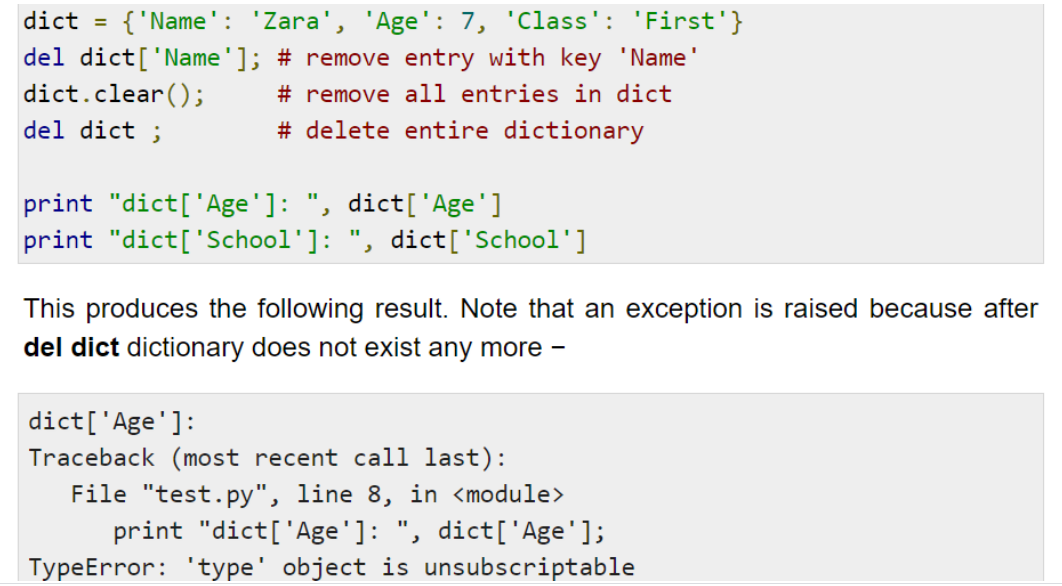 Dictionary values have no restrictions. They can be any arbitrary Python object, either standard objects or user-defined objects. However, same is not true for the keys.

There are two important points to remember about dictionary keys −

(b)Keys must be immutable. Which means you can use strings, numbers or tuples as dictionary keys but something like [‘key’] is not allowed.

In this tutorial, you covered the basic properties of the Python dictionary and learned how to access and manipulate dictionary data.