The class is the core of Java. It is the logical entity upon which the entire Java language is built because it defines the shape and nature of an object. As such the class is an important part of object-oriented programming in Java. Any concept you want to implement in a Java program must be encapsulated within a class.

What is a Class?

The most important thing to understand about a class is that it is used to defines a new data type. Once we defined, this new data type can be used to create objects of that type. Thus, we can say that a class is a template for an object, and an object is an instance of a class. A class in Java contains methods, fields, constructors, blocks, and interfaces.

A class can have any of the following variable types.

Class Variable: These are the Variables declared within a Class and Outside any Method using a Static Keyword.

How to Create a Class?

We can create a class by use of the class keyword. A general form of a class definition is shown here:

You can use the name of objects along with a . Operator in order to access members of a class. 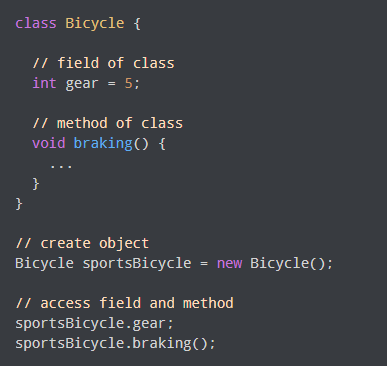 In the above example, we created a class name Bicycle and includes a field name gear and method called braking().

What is an Object?

The Object is an entity that has a state and behavior. The object is an instance of a class and an object is a real-world entity. To access the members who are defined in the class you need to create an object.
for example, a chair, pen, table, bike, book, etc are the example of Object.

As we know Class Provides the Blueprints for Objects. Thus, an object is created from a Class. We need to follow certain steps in order to create an Object and they are as under

Instantiation: A ‘new’ keyword is used to create an object.

Initialization: The ‘new’ keyword is followed by a call to the constructor. Doing so initializes the New-Object.

How to Create an Object in Java?

We can create an object with the help of a new operator. The new operator is used to dynamically allocates memory for an object and return a reference to it.
for example: Box obj = new Box(); 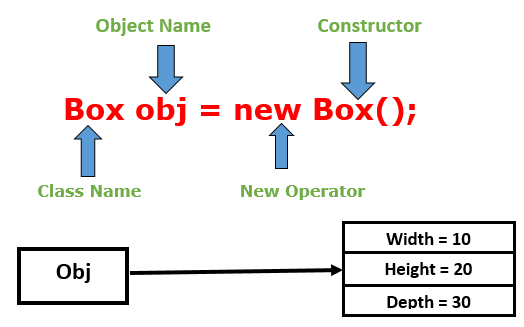 Following are the three characteristics of Object in Java. They are namely State, Behavior, Identity.

State: It denotes the data value of an object.

Behavior: It represents the functionality or behavior of an object such as withdraw, deposit, etc.

Identity: Usually, Object Identity is implemented via a Unique ID. However, the value of the ID is not shown to the end-user but is stored in the JVM internally to identify each object uniquely. 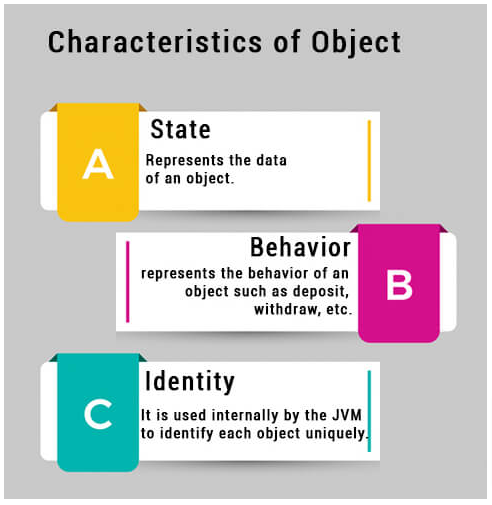 Class and Object in Java with Example Program

The following example computes the volume of a box which is 6000.0 in this case.